Total non-farm payrolls increased 531,000 in October and the unemployment rate fell 0.2 points to 4.6%., The US Bureau of Labor Statistics reported today. Job growth was widespread, with significant job growth in leisure and hospitality, professional and business services, manufacturing, transportation and warehousing. Employment in public education declined in a month.
…
The change in non-farm payrolls in August increased by 117,000 from +366,000 to +483,000, and the change in September increased by 118,000 from +194,000 to +312,000. With these revisions Total employment in August and September is 235,000 more than previously reported..
Emphasis added

The first graph shows the year-on-year change in non-agricultural employment since 1968.

The year-on-year change in October was 5.8 million. This was a significant increase over the previous year.

Salaries in August and September increased by a total of 235,000. 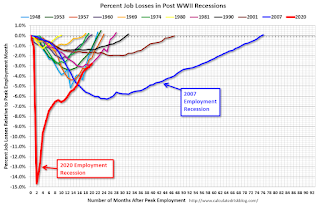 The second graph shows the percentage of unemployment since the onset of the recession.

The current employment recession has been by far the worst in percentage since World War II, but is now not as serious as the worst of the “Great Recession.” 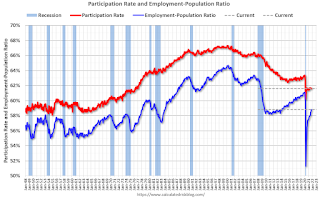 The labor force participation rate did not change from 61.6% in September to 61.6% in October. This is the ratio of the working age population to the workforce.

A graph of the employment and population ratio for the 25-54 age group will be posted later. 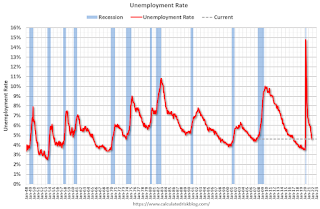 The unemployment rate in October fell from 4.8% in September to 4.6%.

This exceeded consensus expectations and increased by 235,000 in August and September combined. Powerful report. Cow futures under pressure on Thursday Despite the hottest consumer inflation in about 40 years, Treasury yields are almost low on Friday