While 2020 posed more than its fair share of significant challenges for virtually everyone working within the entertainment industry, comics in particular stood as an example of creative teams adapting on the fly—and doing their damndest to keep telling compelling stories at a time when people needed them the most.

The comics industry might not have yet bounced back from the ongoing covid-19 pandemic the way everyone is hoping for just yet, but that doesn’t mean 2020 was a slouch in terms of riveting comics stories.

G/O Media may get a commission

The Ku Klux Klan is a terrorist organization whose commitments to racism and white supremacy are reprehensible, not to mention antithetical to the ideas that Superman is meant to represent. Though Clark Kent has always been a font of corn-fed, heartland (read: white) America, he’s also an adopted immigrant who was taught to value the lives of others, regardless of how different from him they may be.

This reality may have been lost to some readers over the decades that Superman’s been saving the world in DC’s comics, but writer Gene Luen Yang and illustration team Gurihiru’s Superman Smashes the Klan landed in 2020 to remind everyone of this core aspect of the hero’s identity. Though the story’s set in 1946 and focuses on Superman dealing with an easily identifiable racist enemy, the simplicity of Superman Smashes the Klan is what made the comic one of the year’s strongest and most timely. As complicated as dismantling systemically racist power structures may be, racism in and of itself is a rather simple concept that’s rooted in hate and leads to people being harmed. Superman knows that racism’s the opposite of superheroism and justice, and the rest of the world should understand that as well.

Witnessing the God-Corpse, We Only Find Them When They’re Dead (Boom Studios)

The first issue of Al Ewing and Simone di Meo’s We Only Find Them When They’re Dead is an exercise in incredible worldbuilding. Its spartan narrative lays bare everything you need to know about its future intergalactic world of resource shortages and merciless ruling factions in intimate detail, inviting the reader to discover them upon close inspection rather than simply being told.

But there’s a singular moment where the series unveils its titular premise and makes its protagonists and their world feel paradoxically so small and so vast. It’s the breathtaking reveal that our heroes and hundreds of crews like them have gathered at a set time on the fringes of space to strip-mine the body of a vast cosmic being, shimmering in the distance and dwarfing our heroes in perspective. Di Meo and colorist Mariasara Miotti’s artwork is sublime, but it’s the heady mix of beautiful spectacle and funereal sadness that the page invites that makes for one of the most surprisingly “ooh”-worthy moments in comics this year.

Though life has been changing in drastic ways for almost all of the world’s mutants in Marvel’s comics, things have been uniquely complicated for Betsy Braddock, the longtime member of the X-Men who, most recently, has assumed the Captain Britain mantle and all its associated responsibilities.

While this hasn’t been the first time that Betsy’s taken over for her twin brother Brian to serve as Earth-616’s member of the Captain Britain Corps, her latest stint came just as Betsy was in need of a new focus in life. Having recently been split apart from both Kwannon’s body and the Psylocke identity as a whole, Betsy Braddock as a character took on a new prominence that was first made manifest in Tini Howard’s ongoing Excalibur run, but really came to the fore in this year’s X of Swords event.

What’s made Betsy’s presence in Excalibur and Marvel’s other X-books so interesting to dig into is some of the narrative subtext baked into these stories centering this newest stage of her life. Much as Betsy’s still the skilled leader and strategist that she’s always been, she’s also struggled at times to hold onto a solid sense of who she is. This reality is beautifully illustrated by Phil Noto in Excalibur #14, when Betsy literally shattered into hundreds of shards of herself in the midst of a battle.

Luke Skywalker vs. the Knights of Ren, The Rise of Kylo Ren (Marvel Comics)

The miniseries exploring how Ben Solo fell to the dark side might at first seem like something Star Wars fans would devour because it potentially contains a Wookieepedia entry’s worth of new canon. But its most powerful moment was perhaps its most trollish, from a certain point of view.

In the second issue of the series—while on a scouting mission to an old Jedi outpost—Luke Skywalker and a young Ben find themselves confronted by the Knights of Ren and their mysterious leader, also seeking to plunder the outpost for information. It’s not that Luke singlehandedly dispatches the knights, disabling and disarming them with the swiftness of a Jedi Master, but that he does so while Ben watches, and does it wearing the same robes his projected Force-self would go on to wear in his final sacrifice in The Last Jedi.

It adds context to a sartorial choice that, in the movie, was meant to deceive us that we were getting everything we wanted, that a glammed up Luke Skywalker was here to kick Force-ass and wave his laser sword to save the Resistance. Instead, his illusion is contextualized as a taunting reminder to the angry Kylo Ren that the last time he saw his master like this, he thoroughly humbled the foes his former student is now named for. It’s an enrichment of an already great moment in the movie, creating an emotional context rather than simply a new “fact” to consume.

Much as Tom King, Mitch Gerads, and Doc Shaner’s Strange Adventures has been an action-packed mystery, it’s also been a story about the malleability of people’s perceptions of one another. As Mister Terrific enters Strange Adventures, the book first lets you build out an idea about what its take on the character is meant to be like—brilliant, calculating, perfect for solving a crime—before illustrating that all of those aspects of Mister Terrific have always been part of him.

“Super genius” is often hard to characterize as much more than cold haughtiness, but Strange Adventures’ depiction of Mister Terrific consistently gave the character a human quality that tempered his outsized intellect. The comic showed you first-hand what he puts into being truly excellent in a world where people are often born with abilities that make them exceptional by human standards. Also not for nothing, but the book also just made Mister Terrific look pretty damned cool while doing all this.

In ways quiet and loud, Harley Quinn has spent the past few years becoming one of DC’s most malleable powerhouses, a reflection of her growth from the Joker’s sidekick into one of the publisher’s most beloved characters. Harley Quinn: Black and White and Red, the digital-first anthology series in the vein of Batman’s own Black and White, acknowledged this by unleashing a sea of creative teams on the character. None quite so deftly acknowledged Harley’s evolving and nuanced senses of self as Saladin Ahmed and Javier Rodriguez’s story in the third issue.

Framed as a gang of goons recounting the story of robbing a canister of dangerous Joker gas from Harley’s place, each memory of the event is told through the lens of one of Harley’s iconic personas, including her original Batman: The Animated Series goofy harlequin aesthetic; her hard-edged violent Suicide Squad reboot; and the fantastical, out-there weirdness of her modern self. But its best moment comes when the “real” Harley arrives to take back what was stolen from her, along with a reminder: she is all ofthose people in these goon’s recollections and more, and it’s up to her and her alone to define her story.

Image Comics’ Dracula, Motherf**ker digs into the lives of the Count’s trio of vampiric brides as they make their way through the ‘70s in all of the era’s wanton wildness. Though the book obviously spends a substantial amount of time focused on the brides’ bloodlust and their potentially immortal existence as they roam the Earth, artist Erica Henderson’s luxuriously vibrant illustrations brought Dracula, Motherf**ker to life in a way that few vampire stories ever truly manage to do.

In the book’s action sequences, the brides are fluid, striking visions of death draped in couture that each of the women genuinely appreciates and cares for— because, one imagines, they all have a deep connection to the vintage fashions they’ve collected over the ages.

Each volume of Marvel’s Darth Vader comics has done an incredible job of marrying the petrifying figure of the Original Trilogy with the tragedy of Anakin Skywalker’s story in the prequels. Its third and latest entry, from Greg Pak, Raffaele Ienco, and Neeraj Menon, is no exception to this rule. But it is the volume that does so most boldly in an opening story arc that puts Darth Vader on the road to discovering just how his wife died, his greatest failure having sacrificed himself, the Jedi, and the Republic to gain the power to try and change her fate.

Taking Vader back to the locales of the prequels, from the burned-out Lars homestead to the ruins of Polis Massa, it’s a quest that sees Vader reckon with the lie Palpatine tortured him with: that Padmé died in fear at his hands, and the parallels between his inability to save his wife with the post-Empire Strikes Back Vader pondering his failure to convince his son to join him lend a maudlin, hefty weight.

But the best moment of the storyline comes in Darth Vader #6, when Vader sees a holorecording of Padmé’s final moments, as she tells Obi-Wan that there is still good in her husband—words that we know will eventually be echoed by Luke when he and Vader meet again in Return of the Jedi. It’s a gut-punch to see Vader process that moment, and a beautiful reminder of just how much work these comics have done to elevate the original and prequel movies as texts in tandem with each other.

For more, make sure you’re following us on our Instagram @io9dotcom. The New World is riding the pre-release wave, which is a good sign for Amazon 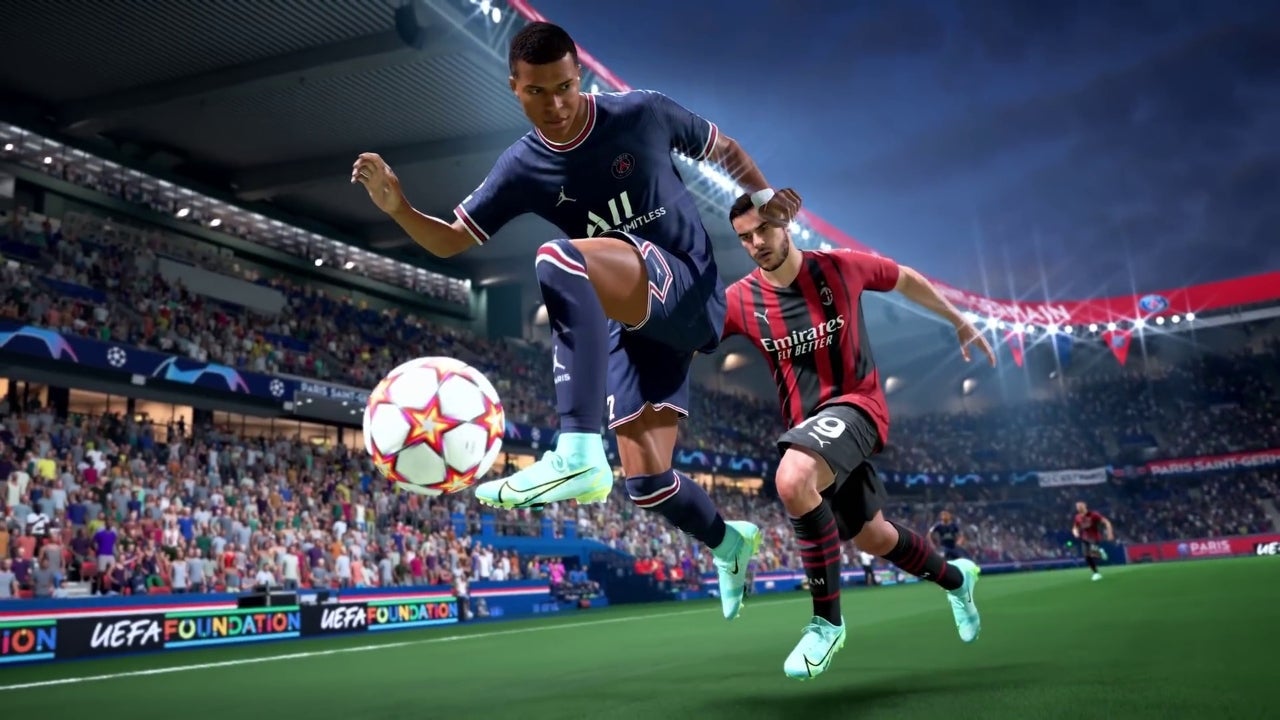 Over 30,000 FIFA 22 players are temporarily banned due to exploits, but rewards can be maintained