Note: I usually post this monthly, but recently hesitated because of the COVID-19 pandemic. But I’ve received a lot of requests lately-the recent numbers are ugly.

This is another update to employment tracking during the presidential term. We often use the president’s term as a time marker-you can use the Speaker of the House, the Federal Reserve Board, or any other marker.

Note: Some readers have asked if we can add lag to these graphs (obviously, the new president will not affect employment in the elected month). But that opens up a discussion about the proper length of the rug, so I stick to the beginning of each semester.

Important: There are many differences between these periods. Overall employment was low in the 1980s, but participation increased in the 1980s (young people and women join the workforce) and is now generally declining. However, these graphs give an overview of changes in employment.

The first graph shows the changes in private sector payroll jobs from the time each president takes office until the end of his term. President Carter and President George HW Bush served only one term.

There was a recession towards the end of President GHW Bush’s term (light purple), and Mr. Clinton (light blue) worked for eight years without a recession.

The first graph is for private employment only. 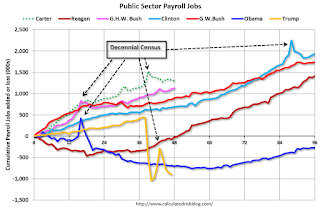 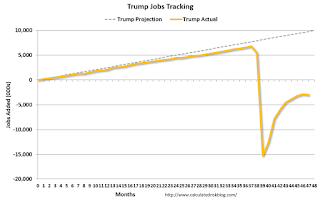 The third graph is Trump’s goal Added 10 million jobs in his four years.

Forty-seven months after President Trump, the economy lost 3,003,000 jobs, about 12.8 million behind expectations. Citizens … Get ready for Boooorrrrow