Today’s post offers up a few thoughts on the terrible year just passed.

Good riddance to what has to be the most difficult year in my life so far.

Since March, I’ve written eight articles about the virus and its impact on my portfolio.

So I’d like to revisit the issues I’ve previously considered for what I hope is the last time.

At the time I started writing this article (just before Xmas), there were 77.8M recorded cases and 1.7M deaths worldwide.

Let’s get the portfolio stuff out of the way first.

I’ve been buying back in for the rest of the year, starting with the obvious stuff like China, gold and tech.

After Xmas, I will be buying into the reflation and recovery trade through cyclical and travel and hospitality stocks.

My plan is to be fully invested by April, which is the earliest that I expect the Covid restrictions to be relaxed.

At the low point in April, my (low-volatility, widely-diversified) portfolio was down 11.5%. 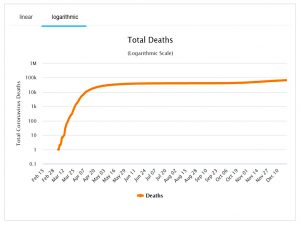 Here are the questions I asked back in April:

During the year we added a couple more:

Before we start, here’s the usual disclaimer that I’m not a doctor, or an epidemiologist – I’m just someone who likes to analyse data, and has a big interest in the economy.

The virus is pretty contagious, and this new mutant appears to be much more contagious than the version we got used to over the spring and summer.

I’m no longer so impressed by the impact of lockdowns on the R number, but this might be down to the lower levels of compliance as the year progressed.

In the absence of a counterfactual or control group (other than Sweden, see below), we must assume that lockdowns, distancing, masks and hand washing are having some impact, though clearly not enough.

The complicating factors from March remain:

What we do know is: 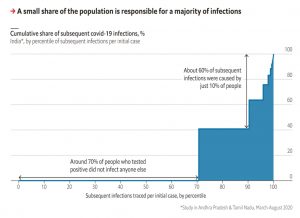 The Economist noted that a minority of people (so-called super-spreaders) are responsible for the bulk of transmission.

In two Indian states, 10% of people caused 60% of subsequent infections. 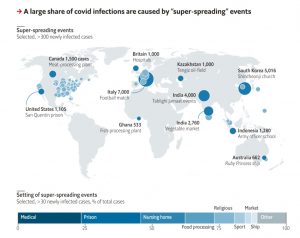 Such transmission occurs most often in large buildings, while just three documented events have taken place outdoors. Risk of infection is greatest among similarly aged people. 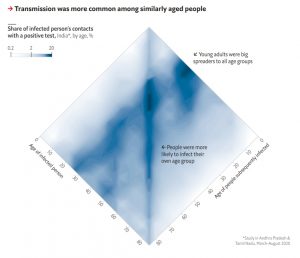 This ought to be the easiest question to answer since deaths are well recorded.

The death rate for resolved cases is down to 3%, and only 0.5% of the active cases are “serious or critical”.

The UK has dropped to eleventh in the deaths per capita table (behind Belgium, Italy and Spain).

There seem to be two factors behind both of these improvements:

It might also be the case that mutations have made the virus less deadly (as usually happens). 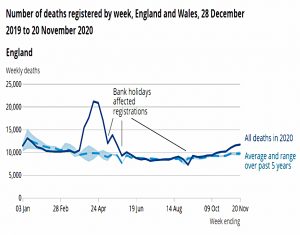 We won’t really know how deadly the virus is until the pandemic is over.

And even that is only a net impact.

Some of the trade-offs include:

There are also second-order effects like increases in poverty, substance abuse, domestic violence and mental health issues – each of which would impact society’s goal of long and healthy lives.

The UK had excess deaths in March, April and May, but they fell back to normal over the summer.

We have around 65K excess deaths YTD in the UK, despite all the countermeasures we have endured.

With the advent of a vaccine, hypothesizing about the prevalence of the virus in the community has become less profitable.

The key numbers now are infection rates and the trend of infections, since these determine the tier of restrictions your area falls into.

A given number of deaths are consistent with more than one scenario:

Most widespread testing studies have found no evidence for widespread infection, but this is complicated by the possibilities that (i) the antibodies don’t last long after fighting the infection and (ii) some young people in particular fight off the virus using T-cells, without ever producing antibodies.

There are two types of test:

I still haven’t had either test as yet.

There are suggestions by some that the popular tests produce a lot of false positives.

Once again, with a vaccine rollout underway, arguments about test accuracy have been superceded.

This idea slowly disappeared as the virus failed to penetrate any community to the necessary levels (in part because of social distancing and lockdowns).

Regular booster shots of a vaccine might be needed, but even a six-month response would give us a good shot at engineered herd immunity. 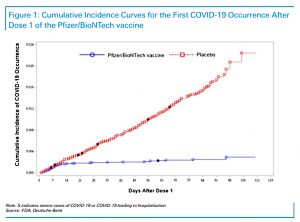 I’m genuinely impressed by the speed with which several useful vaccines have been developed.

And I expect it to lead to a lot of other medical and healthcare breakthroughs in the coming years.

The rollout brings up a number of issues:

I’m happy with the UK prioritisation which favours front-line workers and those most at risk.

The potential for the vaccination rollout to take around a year to complete (in the UK) raises the prospect of “immunity passports”.

There would logistical issues with this.

On the downside, National ID cards have never been popular in the UK (though I can’t see the problem myself).

And such a proposal would further convince the conspiracy theorists and anti-vaxxers that they are right about surveillance chips and mind control.

Here in London, we are in “Tier 4”, which amounts to lockdown.

Getting out of this now seems to depend on the vaccine rollout, but it’s not clear how much of the population needs to be vaccinated before the rules can be relaxed.

And there are 40M people to go after me.

I’m fairly relaxed about businesses going bust since others will spring up to take their place once we have a recovery.

The worst outcome for me would be that government intervention leads to lots of zombie companies who are too strong to die, but too weak to make significant profits.

Did the lockdown work?

In the narrowest sense of stopping the spread of the virus, lockdowns have not been a great success.

But we don’t know whether these things might have been achieved just more hand-washing, masks and some social distancing. 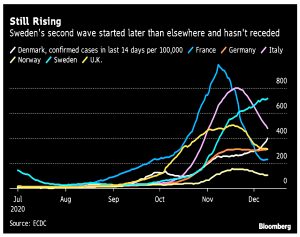 There is no true counterfactual available since lockdown is the path we chose – the nearest thing we have to a control group is Sweden, the poster-child for “no lockdown”.

Finding truly comparable countries is difficult since population densities, demographics, healthcare spending and cultural factors (attitude to authority) seem to play such a large role in how the virus plays out. 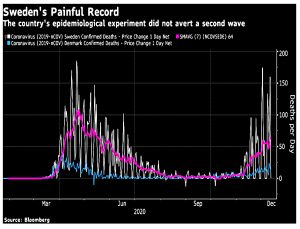 How has the UK government performed?

This has become a deeply politicised issue.

Statists believe in a “one-size-fits-all” approach, and that the State must know best.

Utilitarians believe in the greatest good for the greatest number, even if this means sacrificing some members of society.

Libertarians like myself believe in individual freedom and personal responsibility above all else.

I think we won’t know which countries did badly and well for years and that the true measures of success and failure are the macro ones:

The UK didn’t have a good hand, to begin with:

Things don’t look great for the UK at this point, but they might look better in a couple of years.

For me, there are five questions to answer:

Will the vaccine eradicate the virus?

It’s possible, but the historical track record is not great.

But eradication (or anything close) usually takes many years to decades.

A lot depends on how many people we can convince (or force) to be vaccinated.

Those who don’t think they are vulnerable (or expect mild or no symptoms) may not be keen.

And the altruistic motivation of helping others in society is undermined by those most affected – the old and the already ill.

Polio had the “advantage” of striking down young children.

All of which brings us back to the incentive of immunity passports as mentioned above.

It might be that we will look back on the lockdowns as a massive overreaction.

I think we should have restricted travel over the summer, and the schools and universities should have moved to remote teaching only.

Meanwhile hospitality – which in my experience has been pretty safe, and has not been associated with high transmission levels – seems to have been unduly punished because of the optics of drunk people hugging in the street at the kicking-out time.

I would have preferred a true “firebreak” lockdown – with no movement allowed for two or three weeks – over the summer, in order to eliminate the virus.

Instead, we’ve flip-flopped between tightening and relaxing.

Against all that, we now have a vaccine, and it’s hard to believe that next Xmas will be as difficult as this one.

Mike is the owner of 7 Circles, and a private investor living in London.

He has been managing his own money for 35 years, with some success.

Warren Buffett's Four Ways to Prepare for the 2021 Crash According to Summers, the economy is above the speed limit and the federal government has to put a brake on it.