Today’s post is our fifth visit to Trade Your Way to Financial Freedom by Van Tharp.

We’ve reached the third part of Van’s book (out of four), which looks at the key parts of a system:

Chapter 8 is about setups.

Setups refer to conditions that must occur before another action is taken. They are an essential aspect of most entry and exit portions of any system.

A setup is about 10 per cent (or less) of your trading system. Most people will place all their emphasis on finding the right setups, but setups are actually one of the least important parts of the system.

Van says there are five phases to entry (though phase is misleading since they don’t appear to be sequential – I would call them market attributes or parameters).

Van’s first example is the use of a bear market mutual fund when you expect the S&P 500 to fall. He needs two out of three conditions to be met:

I find the wording of point 3 confusing, but it’s just an example.

Van also mentions the Motley Fool Foolish Four, a kind of “Dogs of the Dow” strategy.

Of course, things didn’t pan out like that and as I write 15 years later, we are close to all-time highs in US indices, and up more than 200% (without dividends) since Van wrote the second edition.

Phase two is the market selection.

Whether it’s newly created futures contracts or stocks that have just been introduced onto the exchange. A lot of mistakes are made in such new issues.

He accepts that IPOs can work in bull markets, and says that a year is usually long enough to wait for a market to settle down.

Next, you should consider the exchange which makes the market.

Is the volatility of the market appropriate?

Does the market (in stocks) have securities of the appropriate capitalisation?

Speculative investors who are looking for sharp moves in the market want low-capitalization stocks (under $25 million). On the other hand, conservative investors want slow, smooth changes in price. You are much more likely to see this kind of behaviour in highly capitalized stocks.

Does the market suit your trading concept?

The less capital you have, the more important this selection process is to you. If you are a trend follower, you need to find markets that trend well. If you follow seasonal patterns, then you must trade markets that show strong seasonal tendencies – agriculture or energy.

You should also select multiple markets, with low correlations between them.

Phase three is the market direction.

If you accept “sideways” as a condition of the market, then you probably want a system that will keep you out of the market the 70 percent of the time in which you are not likely to make money.

Setups are not usually criteria for entering the market. Instead, they are necessary criteria that you should expect before you will even consider taking a position in the market.

You’ve selected the markets you want to trade. You understand your concept, and the current market conditions fit your concept for trading. You also have several market setups, and those conditions have also been met.

One more key criterion should be met before you actually enter the market—the move you are expecting should start. Profitable traders and investors usually wait for the move to begin before they enter the market.

It turns out that few entry techniques beat random entry.

The best way of improving your odds is to make sure the market is moving in the direction you are expecting before you enter the market.

Turtle Soup is a failed test setup named after the Turtle Trader rule for entering the market on 20-day breakouts.

Today, most of these 20-day breakout signals are false breakouts—in other words, they don’t work and the market falls back. 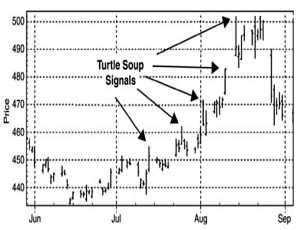 Here we are betting on short-term declines after the breakout high. 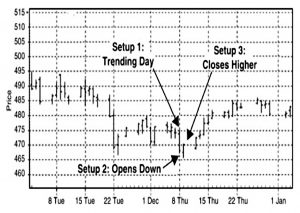 Here we are looking for all three signals.

If your goal is to do short-term trading, or “swing” trading, then failed-test setups are probably what you want to use.

The next kind of setup is an exhaustion reversal, which is similar to a failed test but has extra evidence that the move is extreme and will not proceed.

These types of patterns can vary a lot, and many such climax moves are typically chart patterns that are difficult to objectively describe so that they can be computerized.

Van is not a fan of chart patterns, but singles out the gap climax as an example.

In my opinion, these patterns are dangerous. You are attempting to “stop” a freight train that is going very fast. Climax setups, in my opinion, are primarily for brave short-term traders.

Interestingly, for longer-term traders, Van sees them as warnings that you might be in for a short-term reversal.

The third kind of setup is a retracement, which has three parts:

(1) finding the longer-term trend; (2) getting some sort of pullback from the trend; (3) entering in the direction of the trend based on some third type of signal such as a resumption of the trend with a new high.

This type of setup dates back to Wyckoff in the 1920s. 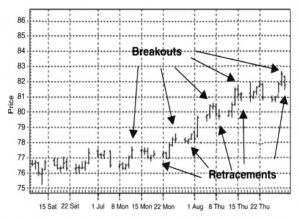 (1) they allow you to place tight stops and thus extract high reward-to-risk trades;

(2) you can use them for both short-term “swing” trading or for long-term “position” trading;

(3) they give you a way to get into a market that you might have originally missed; and

(4) they provide you with an excellent way to get back into a market once you have been stopped out.

Filters are indicators that are needed before you make an entry.

Generally, the simpler your system, the better it will work trading the markets. Many different indicators will help you if each of those indicators is based on a different type of data.

Since filters/indicators are usually based on the same data (price), they are not generally useful.

These days, I guess you might add sentiment (eg. as measured from social media).

Van provides some detail on how to use volume, via the Arms Index (the “TRIN trading index”).

Use a moving average of the Arms Index (typically use about five days). A reading above 1.2 indicates a potential bottom, and a reading below 0.8 indicates a potential top. These are short-term trading opportunities [and]should be combined with an entry signal of price moving in the expected direction.

An extreme reading can often predict a market turn—at least in the short term. You would simply trade some sort of reversal signal that occurs once this extreme was reached.

Under this heading, Van talks about “narrow range” setups:

1. The market is in a trend as measured by any number of indicators such as being above or below a moving average or having a high ADX value.

Van suggests that the current range should be less than 60% of the historic one.

This might also show up a narrowing in the Bollinger Bands.

1. The market has an inside day (that is, its price range is contained between the high and low of the previous day).

2. The market has the narrowest range of the previous X days.

This has been widely publicised, not least in O’Neil’s book:

Van points out that CANSLIM is only part of a system:

You know very little about the actual entry into the market except that the N criterion also includes the stock’s making a new high. You know nothing about protective stops, nothing about how to get out of the market, and nothing about the most critical part of a system—position sizing.

CANSLIM is just setups, which is the least important part of a system.

Van points out that Buffett has never written about his methodology.

Buffett, according to Hagstrom, has 12 criteria that he looks for before buying any company. Of the 12 criteria, 9 amount to setups, and the remaining 3 might be considered entry criteria.

Once again, not a system (but then Buffett is not a trader – his ideal holding period is forever).

Kaufman’s solution is an adaptive moving average and a “market efficiency” filter.

As the market gets more volatile (noisy), one must use a slower trend to avoid getting whipsawed in and out of the market. At the same time, the faster prices are moving, the less significant noise becomes.

Kaufman’s efficiency ratio divides the net price movement between two time periods by the sum of the [modulus of the] individual price movements.

This is a ratio of speed to noise, over 10 days.

Kaufman maps this number to different speeds of signal/entry.

Gallacher says that you must select markets according to value – [are] historically “cheap” or “expensive.”

This is easier for some markets than for others.

Then you need to work out which fundamentals drive the market.

Gallacher’s book is fairly old now, and the globalisation of the world’s economy could have impacted the drivers he identifies.

Van is not convinced:

It is very difficult to get any precise setups for commodity fundamentals. The only thing you really get is a bias that says (1) be neutral, (2) be bullish, or (3) be bearish.

Ken Roberts is a commodity trading trainer who doesn’t seem to have written a book.

Essentially, the setups require that the market make a major high or low and then show a reversal hook pattern. You open a position when it’s “clear” that the major trend is reversing.

The high/low is for the last nine months to one year.

When the market retreats again past point 2, you have an entry.

Again, Van is not convinced:

Setups in the Roberts method seem subjective to me. The major high or low is fairly objective, but the exact time parameters under which it occurs are not. [1-2-3] patterns occur in the market after almost every high. 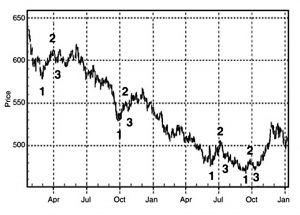 The chart suggests that the pattern has worked, but there are three earlier failed setups on the same chart.

It’s been heavy going today, and we’ve only covered a single chapter.

After all that, setups are not crucial.

Mike is the owner of 7 Circles, and a private investor living in London.

He has been managing his own money for 35 years, with some success.

What's behind the dramatic surge in California's massive fires?

My father died and his girlfriend stopped paying his mortgage.She wants her son to raid — and buy a house for foreclosure

Nifty Target Price: Nifty has 16,000 in its field of view The edge of Wall Street is open and high, despite growing jitter. Dow Flats by Investing.com

Is the driver shortage a fact or fiction? — Roading and rolling